In 2015, I wrote a book for Rutledge, Urban Competitiveness and Developing Economies.  It was focused principally on cities in North America and Western Europe, and a reviewer wondered why I had not given some attention to cities in the developing world.  To me, that was another book, and to accomplish this, I began to contact colleagues who were specialists in the economics of developing countries.  Winnie Mitullah of the University of Nairobi, Kenya, wrote about cities in Africa, Ni Pengfei of the Chinese Academy of Social Sciences helped me write about Asian cities, and Isela Orihuela and Jaime Sobrino of Mexico City (of the Mora Research Institute and El Colegio de Mexico, respectively) wrote on Latin American cities.  I wrote two introductory chapters on urban economies and competitiveness. Each regional section was composed of a chapter on that region and the global economy and another on the region’s cities and competitiveness. Isela Orhihuela contributed a concluding chapter with findings of our research, and this has been very useful to me in writing this précis of our text.

While there are considerable and apparent differences between urban economies in higher-income nations and those in the developing world, they are pretty similar in their aspirations for their residents.  They all want improving economic lives for their people, economic growth over time, access to advanced technology, literacy and education, good health and security in their daily lives, and promising futures for their young people.  While these objectives are still in the process of being achieved in higher income countries, after a century or two of progress, in lesser developed economies, political instability, lack of access to capital, investment capital and markets, as well as deficiencies in education and health care have made it difficult for individuals and for their communities to achieve sustained progress in development.

The peoples of Africa, Latin America and Asia do not have to attempt to achieve their objectives alone – most developed countries have initiated programs to transfer material resources and knowledge to these countries.  Many multinational organisations, from the United Nations to regional entities, have lent their resources, know-how, market access, and human development initiatives. The developing world does not have to develop the science, technologies, and products that dominate today’s globalised economy. They aim to develop institutions and structures to facilitate their material advancement. However, in most developing counties, there is now an essential investment in research and product development. Significant progress has been accomplished during the past several decades, but there has also been stagnation and back-sliding in some instances.  The progress and backsliding of recent years offer inspiration, cautions, and examples that should benefit the individual cities and regions in lesser developed countries.  In this book, we will explore what has been accomplished, what has been learned by experience, and what remains to be done.

Cities in developing countries are significantly affected by the negative aspects of global warming and climate change in their broadest sense.  Often cities are inundated by tropical rains that bring erosion and flooding, increasing temperatures are diminishing the livability of many of them, and drought has destroyed their agricultural districts and the products traded and transformed in cities.  Population growth through the immigration of individuals from various districts generates an urban population with few common values, institutions, and skills.  Creating a community important for developing a competitive urban economy is challenging. The result is extensive slums rather than Jane Jacobs’ neighbourhoods.

One thing observed in the various parts of the world economy is that politics at the national government level often has little to do with the benefit of the city’s economy.  Most countries in the developing world experienced rapid urbanisation during the 20th century.  The earliest settlements were usually on the coasts at ports that were the primary lifeline to the economy.  Subsequent settlements often took place at higher altitudes where healthier environments were found.  This was supported by rapid migration of people from agricultural and resource development areas, and these flows of poor migrants led to the creation of slums in which traditional social institutions and structures were lacking.  Corruption, grandstanding and irrelevant political posturing inhibit activity at the level of many of these cities.

Social and cultural issues have hindered development throughout the developing world.  In colonial Latin America, the race was an issue, but with independence, income became crucial, with peasants from the countryside flooding into cities dominated by middle-class residents.  In Africa, race, culture, and religion have been divisive factors, with migrants having low levels of education and skills and with no contacts to help integrate them into the urban society and economy.  Asian cities are less affected by religion and race, but income inequality is based on a lack of skills and access to social institutions that have generated income inequality.  This inequality has marked Chinese cities, with migrants having little access to social services other than in their home city or town. South Korea and Mauritius have been among the most prosperous countries in reducing income inequalities and segregation.

As societies urbanise, there is a tendency for fertility rates to fall.  Couples lack supportive connections with family and local society, and often, both partners are obliged to work to have sufficient income, and starting a family is postponed.  One of the results of this is the ageing of the population, with a smaller portion of the population being productive and a growing population becoming more reliant on support services provided by the state rather than family.  For a growing percentage of the population, the cost to society exceeds the contribution of this group to social output.  In many countries, high crime, often linked to the drug trade, makes life unbearable for many of the younger and potentially most productive members of society, and they choose to attempt to migrate to a safer country.  This adds to the developing turmoil and uncertainty that hinder economic progress.

In most of the countries of the developing world, power over resources and decision-making about policy resides at the national level.  The president and the prime minister are located there, as are the decision-making institutions of the national government. City governments are individually constrained in their capacity to effect positive change and policy adoption that will positively impact their national or international competitiveness, and they remain isolated from other cities in the same constrained situation.  Few of them, except for capital cities, can implement a policy that will enable them to realise their true potential.

It remains the case that the keys to developing the economy of any country are education, skill development and investment.  Throughout this book, we have focused on the difficulties confronting developing countries and many of their successes. National governments are not always as effectively supportive as they should be if development at the local level is going to occur.  Hence, throughout the developing world, we see cities forming organisations that enable city governments to share successes and failures, study policies of potential benefit, and collectively lobby entities at the national or international level.  There are the African Union, the United Cities and Local Governments of Africa and the Future Cities Africa Initiative; in Latin America, there is the Americas Society and FLACMA (The Latin American Federation of Cities, Municipalities and Local Government Associations).  Many other organisations have been supported by, e.g., the World Bank and the United Nations, for the benefit of cities throughout the developing world.

In this context, decisions are made that determine the degree to which a country’s urban centres can achieve competitiveness in a broader context of the national, continental, or global arena.  In many economies of the developed world, dozens of cities are internationally engaged but participate effectively as individual free agents, thus never achieving the synergies gained through interaction among many cities.  However, it is often the case that in countries of the developing world, there will be only one or a minimal number of cities that are so engaged.

Of course, many stories in the developing world of places that have achieved progress in economic and social development – Mauritius and Korea have been mentioned. They should inspire those cities and regions still seeking to chart a successful course. 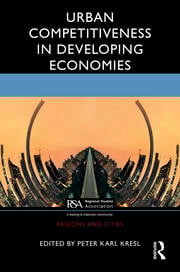